Nikon 1 J1 Digital Camera The three zoom lenses are VR stabilizedbut in a departure from past practice activation is accomplished via camera menu rather than a switch on the lens itself. When compared to photographs from a Nikon D3the J1 held its own, exhibiting perfect exposure and vibrant colors. The lens also locks easily and can become a hassle when trying to smoothly take photographs, but is fine once the user gets the hang of it.

They do note the peculiar layout of the dials and buttons on the back of the camera. They offer that the dial should have more options on it, rather than Nikon 1 J1 Digital Camera the user to delve into menus to get to settings that would normally appear on the setting dial. They also point out that because the lenses for this camera do not have manual focusing rings, the manual focus that the camera does have is rudimentary at best.

According to the review, it lags in wake-up time from sleep mode, picture review right after taking a picture is too long and its lack of Nikon 1 J1 Digital Camera make it uncompatible with other Nikon 1 accessories. Nikon made a lot of their Motion Snapshot mode, which captures a small snippet of video before capturing a full-res still image. After capture, you press the F button to set the combo to music. Choices are Beauty, Waves, Relaxation, and Tenderness.

In Playback mode, pressing the OK button plays back first the video, then the still as the music plays the background. I'll be brutally honest.

I don't get it. Someone will, though, and get good at capturing Motion Snapshots for some art show that requires monitors and projectors, making them millions. More power to them.

I'd have rather had PASM on the dial. Gray the letters out or make them accessible with a key, I don't care, but make them available on the dial to reduce menu digging.

Other companies in this space, notably Panasonic and Olympus, have omitted the Mode dial to reduce camera size, but Nikon included it, they just didn't give it the modes one would want a dial for. Again, it's the camera's target market that determines so much of the Nikon J1 design, and it isn't photography enthusiasts. But even for consumers, I think both of these modes would do better buried in a Scene menu. The other apparently Mode-dial-worthy mode is Smart Photo Selector, giving it a place on the Mode dial, a child of the long-standing Best Shot Selector from Coolpixes gone by. This one fires off up to 20 shots and looks for blur and poor composition, then whittles Nikon 1 J1 Digital Camera the shots for you from 20 to five.

Then you get to choose the final picture, or else keep all five. At the launch event, I was told that Smart Photo Selector also accounted for subjects blinking, but that's not mentioned in the user manual, and doesn't seem to be the case based on photos selected as being the 'best' by the camera. It did seem to do a reasonable job of choosing the least blurry images, though, and that in itself is probably enough to make it a useful function for many consumers.

Though I say that the above modes would be better buried in the Scene menu, it turns out that the Scene menu doesn't exist on the Nikon J1. Someone's finally recognized that people seldom use Scene modes, so all they included on the J1 was Scene auto selector.

Select it, and you just depend on the camera to know when you're photographing a red sunset Nikon 1 J1 Digital Camera not an Irish Setter. Some of the more recent digital photography innovations are completely absent from the Nikon J1; things like sweep panorama, handheld multi-shot, and HDR modes. It's as if the feature list was established two years ago and these were left out because they weren't part of the standard set of expectations. 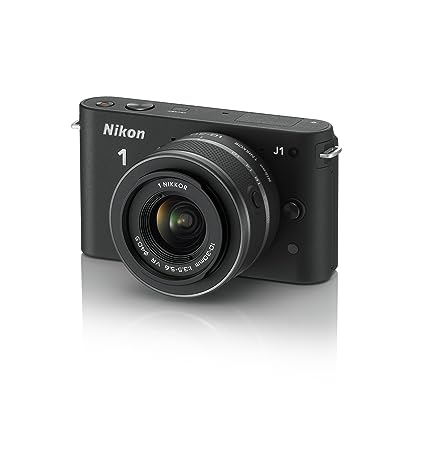 One final intriguing element to the Nikon J1 for stealth photography is its lack of physical shutter curtains. Sony's latest cameras have the option of an electronic first curtain, but finish the exposure with a real shutter.